I received my 100th patent (together with my 101st and 102nd) today.  This milestone gave me cause to reflect on the amazing experience of answering "what do you do for a living" with "I'm an inventor."  I started to say "inventor" when I had around ten patents, but it was always softened with "I do lots of things, including inventing".  Around fifty patents, the caveats fell away, and at one hundred patents I don't have any hesitation in describing my job as "inventor" (although I've added consultant, speaker and author along the way).

I started to wonder how many people have enough patents that they probably either earn a living as an inventor or are capable of earning a living as an inventor.  Unfortunately, the U.S. Patent and Trademark Office (USPTO) does not keep a registry of inventors, so a search for "Smith, John" returns almost 500 patents, but no indication of which patent was invented by which "John Smith".  In the past I used faqs.org's inventor page and top 100 inventor page to get an idea about how many prolific inventors are actively receiving patents, but that data is based on patent applications and not issued patents.  Moreover, I have spot checked the data against inventors I know, and I was not convinced that inventors were accurately identified (for example, the page with Shuster has at least seven different entries for me).

I was thrilled this week to find http://thedata.harvard.edu/dvn/dv/patent/faces/study/StudyPage.xhtml?studyId=70546&tab=files, a Harvard University project that includes a database of all patents issued between 1975 and 2010.  Critically, the Harvard team processed the data using a complex Bayesian algorithm to generate a data point the USPTO does not provide:  A unique inventor ID.

I had 37 patents issue to me by the end of 2010.  The raw data contained 38 patents issued to a "Gary Shuster", but one was to "Gary B. Shuster", so it appears that the raw data is accurate.  Much more importantly, the data set assigned all 37 of my patents to a single unique inventor number.  I spot checked other inventors, and the unique inventor identification system seems pretty solid.

The data becomes a lot clearer when graphed: 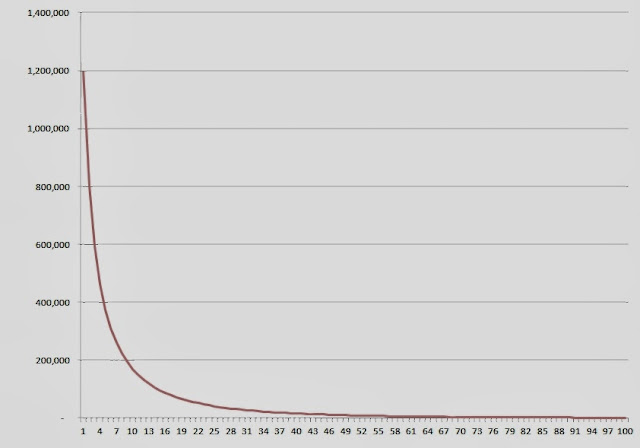 This chart shows how many inventors (Y axis) have been issued more than a certain number of patents (X axis).  So there are, for example, just under 1.2 million inventors who hold more than one patent.  As you can see from the chart, there is an extremely rapid fall off in the number of patents per inventor.  The fall of is so extreme that a logarithmic chart is more helpful in analyzing inventors of more than around 20 patents: 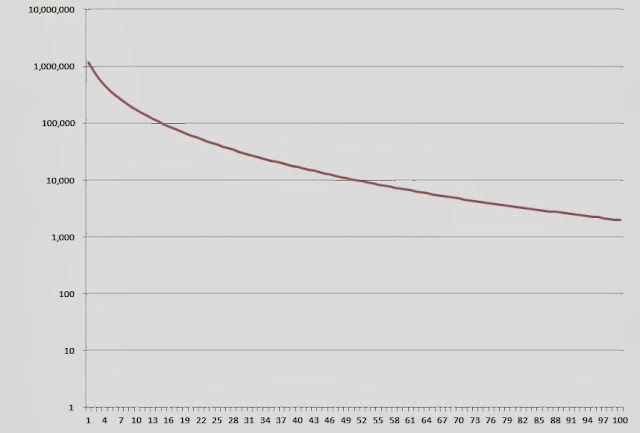 Done logarithmically, we can take the chart out to show inventors with up to 1,000 patents: 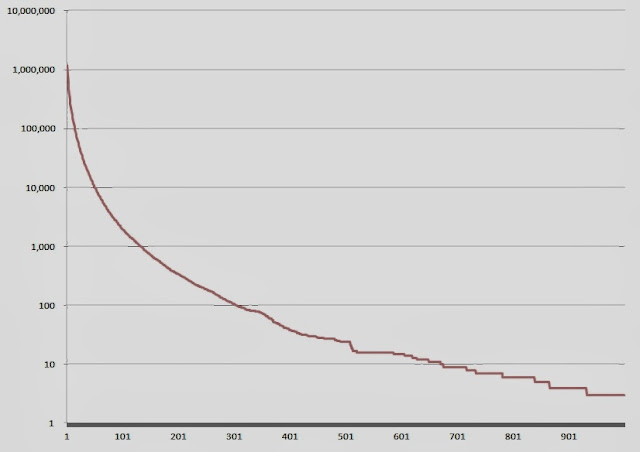 Before we attach undue significance to the numbers, it is important to understand the limitations created by the range of data behind them and the trends in patent issuance.  First, the rate of patent allowance has been rising, as has the number of patent applications.  The USPTO reports that 276,788 patents were granted in 2012 -- more than double 1997's 124,069 patent grants and more than quadruple 1983's 61,982 patent grants. 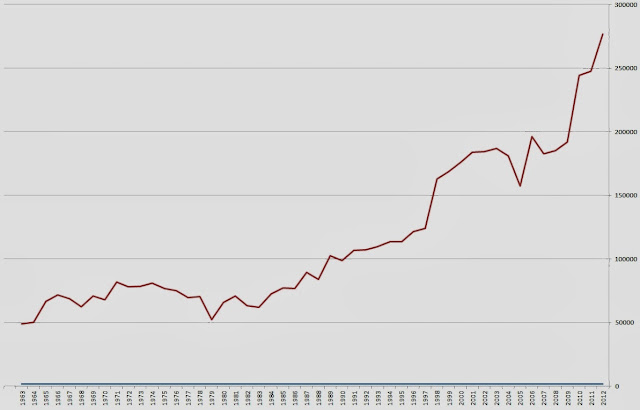 The rise in patent grants charted from the USPTO data is quite steep, as shown on the graph above.  Because the grant rate was less than 82,000 patents per year in the years prior to the 1975 start of the Harvard data set, there are a smaller number of prolific inventors who were issued some of their patents prior to 1975 and some after.  Inventors who straddle the 1975 start of the Harvard data set present a problem in that they will be counted as inventors, but their total number of inventions will be under counted (as some of their patents fall outside of the lower bounds of the data set).  An analogous problem exists, but of a greater magnitude, for inventors receiving patents after the 2010 upper bound of the Harvard data set.

My own patent grant history illustrates the problem.  As of the 2010 cut-off date for the Harvard data set, I had 37 patents.  At the time I am writing this in late 2013, I hold 102 patents.  As a result, I appear in the data set as a moderately prolific inventor, in the top 1% of inventors.  However, my 102 patents would have put me in the top 99.987% of all inventors in the Harvard data set.

Another limitation is the Harvard study's failure to distinguish continuation application data from original application data.  Inventors can obtain multiple patents based on a single patent application, usually in the form of patents that issue from continuations of the original filing.  It is common for patent families to exist, representing multiple patents based on a single original patent application.  Some of the patents in a single family are deemed by the USPTO (sometimes incorrectly) to be sufficiently similar that a "terminal disclaimer", tying the expiration date of one patent to the expiration of another similar one, is required.  Continuation practice serves a very important purpose, allowing inventors to disclose a technology that includes multiple patentable elements.  By incorporating the full description of the technology in a single document but separating the covered claims into logically connected groups within different individual patents, the world can better understand the full scope of the technology without having to claim multiple independent pieces of the technology in a single patent claim set.

There is an enormous difference between an inventor who has developed 50 different technological breakthroughs and an inventor who has developed just a few different technological breakthroughs but obtained 50 patents through aggressive continuation filings.  It is possible (though wasteful) to obtain more than 100 patents based on a single patent filing.  It is also possible (though likely a poor strategy) to obtain only a single patent per patent filing.  Unfortunately, the Harvard study does not identify how many patent families each inventor has invented.

Finally, my analysis of the data does not distinguish between somebody who is named only as one of a large team of inventors and an inventor who has developed the invention on his own.  Often, participating as a member of a large team makes it easier to make a small contribution to an enormous number of patents, thereby boosting the raw number of issued patents without requiring the 100% contribution that a solo inventor must make.

First, I note that since there are only around 2,000 people with over 100 patents out of a global population of 7 billion, only one person in 3.5 million has as many patents as I do.  I know what I do is unusual, but when I do presentations about innovation for kids, I find that more than 10% of the kids could easily create as prolifically as I do.  So as nice as it is for my ego to say that my invention skills are 1 in 3.5 million, this is less a reflection of my creative genius as it is of the failings of our educational system and a fundamental error in how human adults have come to view creativity.

For every innovator who is knowledgeable about patents and capable of filing for them, there are plenty who are not participants in the patent system.  This, and the rapid rise in patent applications and grants, lead me to believe that there are likely 10,000 people who could easily earn their living strictly by innovating.

As people who have seen me speak know, anybody can be a prolific innovator, but those 10,000 people I identify are those who can do it now, without having to rethink how they approach innovation and creativity.  10,000 people out of a global population of more than 7 billion -- one out of every 700,000 people -- is a testament to how poorly we do at helping children to nurture the innovation that comes to them so naturally.  Some time between childhood, when we see no limitations, and adulthood, when we see only limitations, we are failing.  It does not need to stay this way.  And I'm making it my life's work to see to it that it doesn't.